Kew Gardens is a uniquely structured neighborhood in the central area of the New York City borough of Queens. A half hour away from midtown Manhattan, this affluent residential community of Kew Gardens, is shaped roughly like a triangle, and is bounded to the north by Union Turnpike and the re-named Jackie Robinson Parkway (formerly the Interboro Parkway), to the east by the Van Wyck Expressway and 131st Street, to the south by Hillside Avenue, and to the west by Park Lane, Abingdon Road, and 118th Street. Forest Park and the neighborhood of Forest Hills are to the west, Flushing Meadows–Corona Park north, Richmond Hill south, Briarwood southeast, and Kew Gardens Hills east. Kew Gardens is located in Queens Community District 9 and its ZIP Code is 11415.

Kew Gardens remains a densely populated residential community, with a mix of one-family homes above the million-dollar range, apartment complexes, co-ops and others that have been converted into condominiums. A new hotel has been completed on 82nd Avenue, reflecting a modernization of the area. However, it is filled mainly with apartment buildings between four and ten stories high; while many are rentals, some are housing cooperatives (co-ops).

Along the borders of Richmond Hill, Briarwood, and Jamaica, many smaller attached houses exist. Many of these are two or three family homes. Expensive single-family homes are located around the Forest Park area. However, many owners are selling out their detached homes to developers who teardown and convert them into apartment housing or more expensive, lavish multi-family houses. Forest Park is a well-preserved area in the community that offers well-maintained trails and paths that are used for walking, jogging and even horseback riding year-round, a golf course and the vintage Forest Park Carousel was added to the National Register of Historic Places in 2004.

The neighborhood is also “home away from home” to many airline personnel because of its proximity to the MTA's Q10 bus line to John F. Kennedy International Airport, as well as to Delta Air Lines and other airlines' special shuttles that serve pilots and flight attendants staying in Kew Gardens.

The heart of Kew Gardens’ commercial center is Lefferts Boulevard between Austin Street and Metropolitan Avenue. Major attractions include the large sports bar Austin's Ale House, the Village Diner, Dani's Pizza, and Kew Gardens Cinemas, a 1930s art deco movie theater that has been converted into a six-screen multiplex and shows a mix of commercial, independent, and foreign films. Lefferts is also home to the only bookstore in central Queens, Kew & Willow Books. Kew Gardens also has many locally owned small businesses and restaurants especially on Lefferts Boulevard, Metropolitan Avenue, Austin Street, and Kew Gardens Road. The site of the Queens Criminal Courthouse is also very profitable, as is multiple transportation options to the area; however, neither profit the neighborhood directly, but instead serve as an incentive for other NYC residents to move to the area. 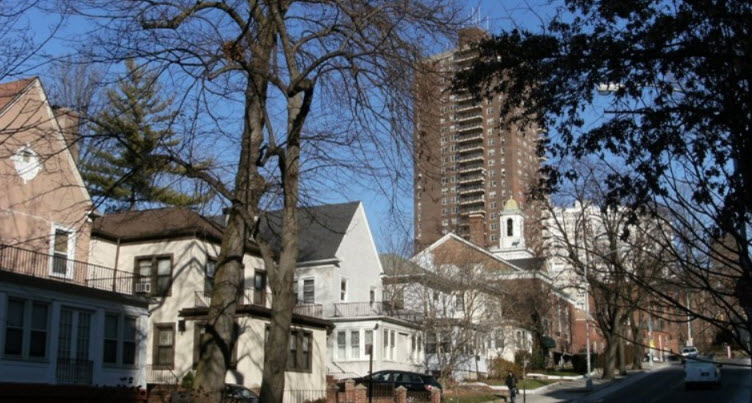